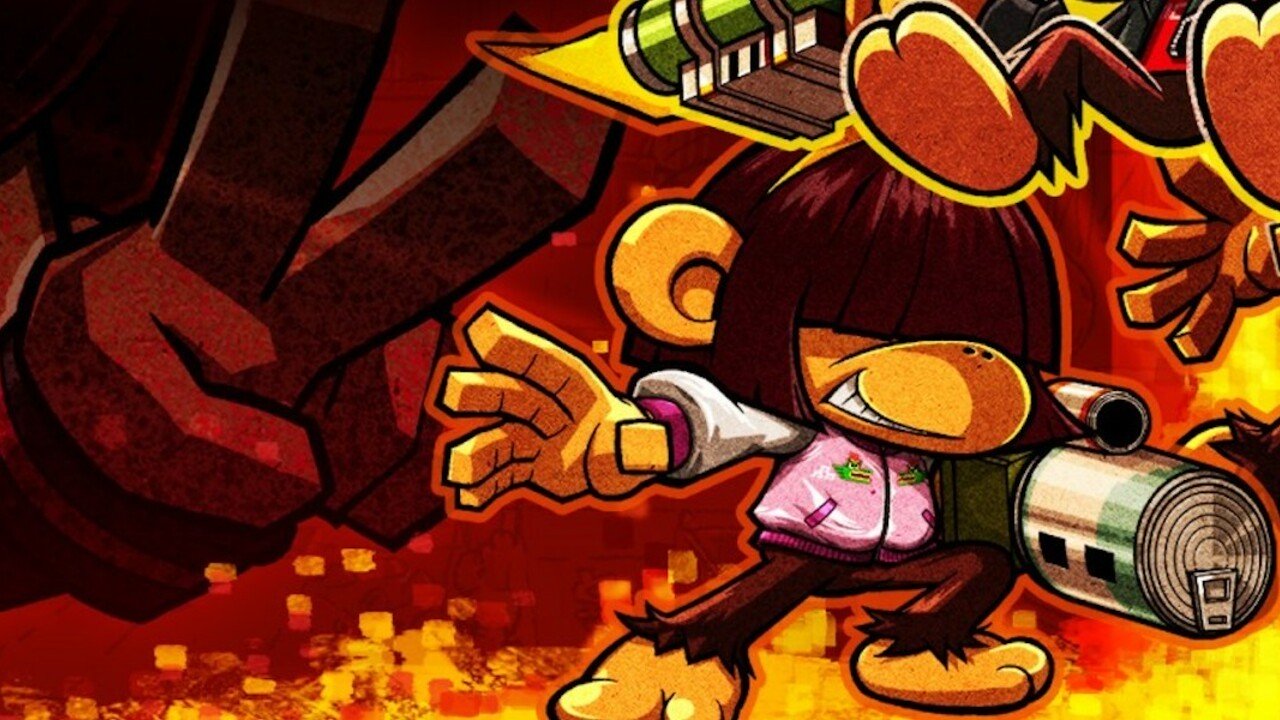 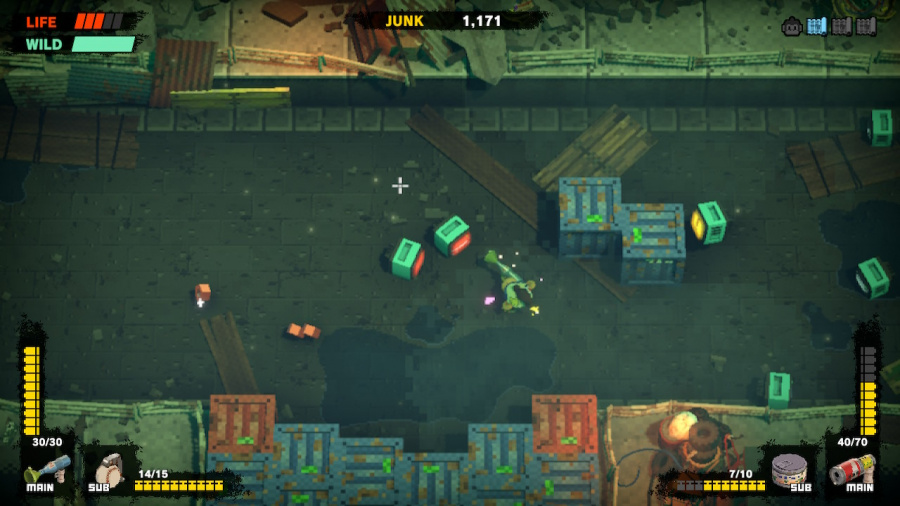 There’s a pretty good chance you aren’t too familiar with developer Good-Feel. You will, however, be very familiar with some of their previous titles. Working almost exclusively with Nintendo since the days of the DS, Good-Feel has brought us titles such as Wario Land: Shake It!, Kirby’s Epic Yarn, and – most recently – Yoshi’s Crafted World on the Nintendo Switch. Monkey Barrels is the team’s first self-published title, and is a very different affair to their usual efforts. But is it any good? Let’s find out.

Monkey Barrels is a twin-stick shooter in which a pair of brave monkeys set out on a mission to save their friends against the evil robotic appliances of electronics giant Crabbenwold Electro. Across 22 stages set in various environments, you’ll be facing off against wave upon wave of enemies in a game that puts excellent focus on unlockable weapons and power-ups. You’ll have two weapons available at all times, mapped to both ZL and ZR, along with two sub-weapons normally consisting of various grenades. You can only control one weapon at a time, so dual-wielding unfortunately isn’t an option here, and you’ll have to reload both guns separately, too. 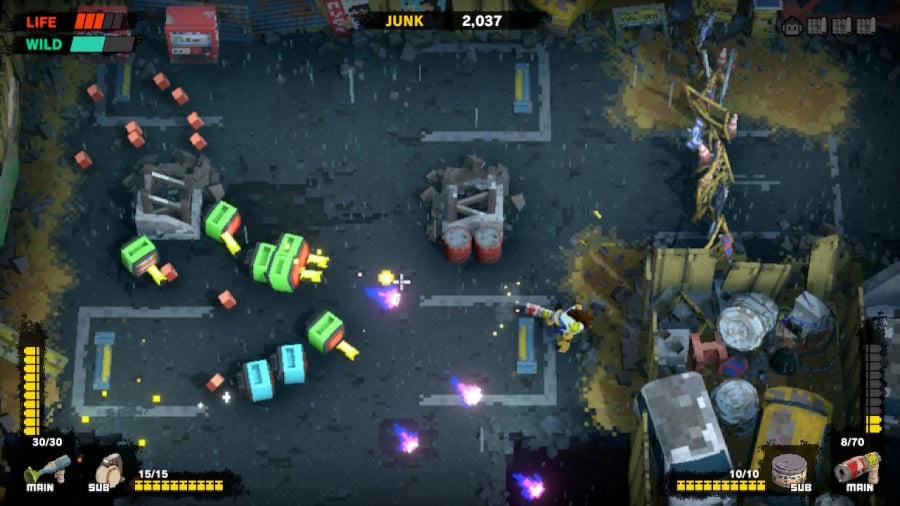 Enemies generally tend to spawn in groups, and the majority of them tend to simply rush towards you in the hope that physical contact will halt you in your tracks. Many more, however, come equipped with devastating weaponry of their own, and this is where the game kind of morphs into a bullet-hell shooter, with neon purple bullets flying across the screen in bonkers patterns, forcing you on the defensive. There’s a really good mixture of enemies in the game, enough so that you’re constantly switching up tactics as you progress.

On the flip side, where the enemy design is great, the level design is a bit lacking across the board. Taking place across a range of different locales like urban cities and lush jungles, the levels are certainly visually appealing, but it almost feels like they’ve been procedurally generated – there’s no deliberate attempt to differentiate the stages from one another, and as a result, Monkey Barrels can often feel a bit repetitive. Thankfully, however, the vast amount of unlockable guns and grenades somewhat makes up for this.

Within the main hub area of the game, you can swap between the two playable characters (doing so won’t grant you any perks, as such, so it’s mostly personal preference here), and you can also visit the vendors to sort through your inventory and buy any available guns. There’s a really good selection right from the start of the game, with some guns upping the rate of fire while others pack devastatingly powerful bullets. With the ability to carry two different guns at all times, there’s a lot of opportunities here for experimentation as you search for your perfect loadout. 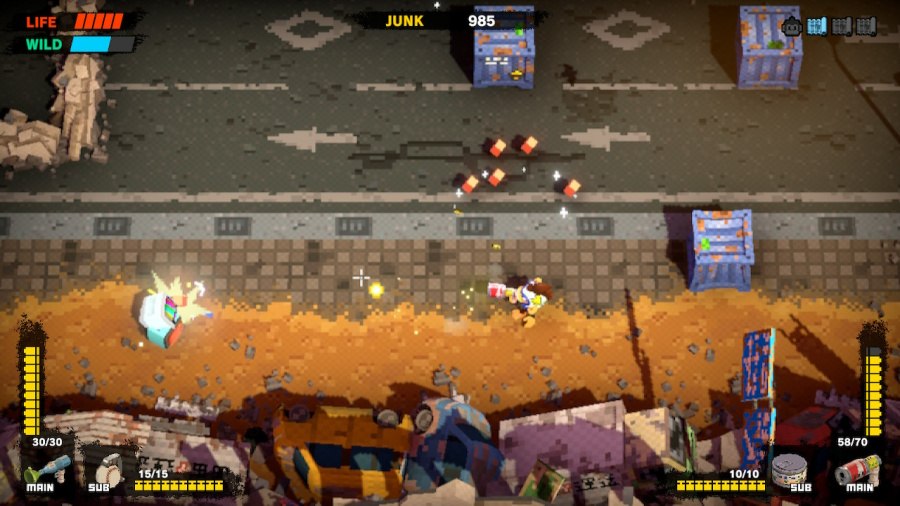 The overall difficulty in Monkey Barrels is very much dependent on how soon you land upon your preferred loadout. For a good while, you’ll no doubt be dying left, right and centre, particularly on the devilishly difficult boss battles. If, however, you’re packing the right combination of guns and grenades, you’ll quickly settle into a flow and quite effortlessly gun down countless enemies. That’s not to say the game necessarily becomes easy, but you get a feeling of accomplishment comparable to when the gameplay eventually clicks in difficult titles like Ikaruga, for example.

Once you’ve progressed a certain way in the main story mode, you’ll unlock an online multiplayer mode. Here, up to six players duke it out to collect as many banana pieces as possible within a set amount of time. You’ll have access to all the weaponry you’ve unlocked within the main game, which makes for a riotous good time if your opponents also have access to some of the more impressive guns available. The mode, as a whole, is a nice distraction, but it doesn’t have the same level of depth that the story mode has – and unfortunately, there’s also no option to play locally with friends. Perhaps this will be added in a patch at a later date, because there’s a heck of a lot of untapped potential here. 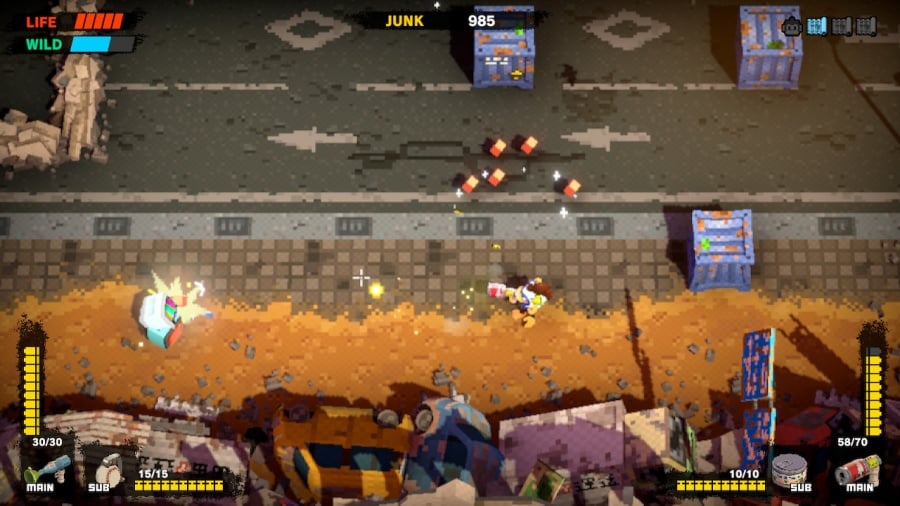 Visually, the game looks stylistic and unique, with 3D pixelated graphics (think Minecraft) making up the characters and environments. Whilst this might not particularly appeal to a broad range of gamers, there’s no denying that the plethora of bullets and explosions lighting up the screen look fantastic with the chosen art style. One thing’s for sure, with games like Yoshi’s Crafted World under its belt, we can certainly count on Good-Feel to provide a visually arresting game.

Monkey Barrels is a great twin-stick shooter that perhaps plays it a little too safe at times. There’s a fantastic selection of unlockable guns and grenades, with some providing excellent visual treats and strategic advantages, but the level design leaves a lot to be desired thanks to its repetitive nature. The unlockable multiplayer mode is a decent distraction that’s fun for a while but ultimately lacks the same depth as the main story mode. There are stronger twin-stick shooters available on the Switch, but this is nevertheless a welcome addition.