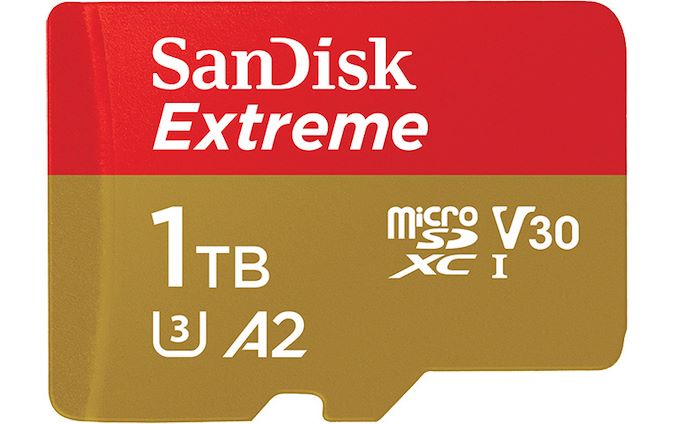 Marking a new high in microSD card capacities, Western Digital has started shipping its flagship SanDisk Extreme 1 TB microSDXC card. This is the company’s (and industry’s) first 1 TB microSD card, and while the $450 launch price is definitely steep, for portable devices that need a massive amount of storage in a thumbnail-sized removable card, a full terabyte is the biggest step up yet.

When it comes to performance, the memory card is thankfully a member of SanDisk’s higher-performing Extreme line, so performance isn’t too pokey for reading and writing a full TB out of the drive. Formally, SanDisk rates it for read speeds up to 90 MB/s and write speeds up to 60 MB/s when working over a standard UHS-I interface. This works out to roughly 3 hours and 4.6 hours to read and fill the card, respectively. In fact at this point SanDisk is outright bottlenecked by the UHS bus; the card can actually read at 160 MB/s and write at 90 MB/s when used with proprietary hosts that support DDR transfer modes. So microSD Express and its vastly higher transfer rates can’t get here soon enough.

Along with its advertised peak performance, SanDisk’s supersized card supports video speed class 30, which among other things means that its minimum write speeds need to be at least 30 MB/s. The card also meets the requirements for the A2 app performance class, meaning that it can sustain at least 4000 random read IOPS and 2000 random write IOPS, and supports capabilities such as command queuing and caching.

Unfortunately for tech enthusiasts, SanDisk isn’t saying much about the 1 TB card under the hood. Given the capacity, the card is likely based on the company’s latest 96-layer TLC or QLC 3D NAND memory. But short of tearing it apart, this is hard to confirm.

For the moment the new 1 TB microSD card is available directly from Western Digital for $449.99. But eventually the product will hit regular retail stores too.