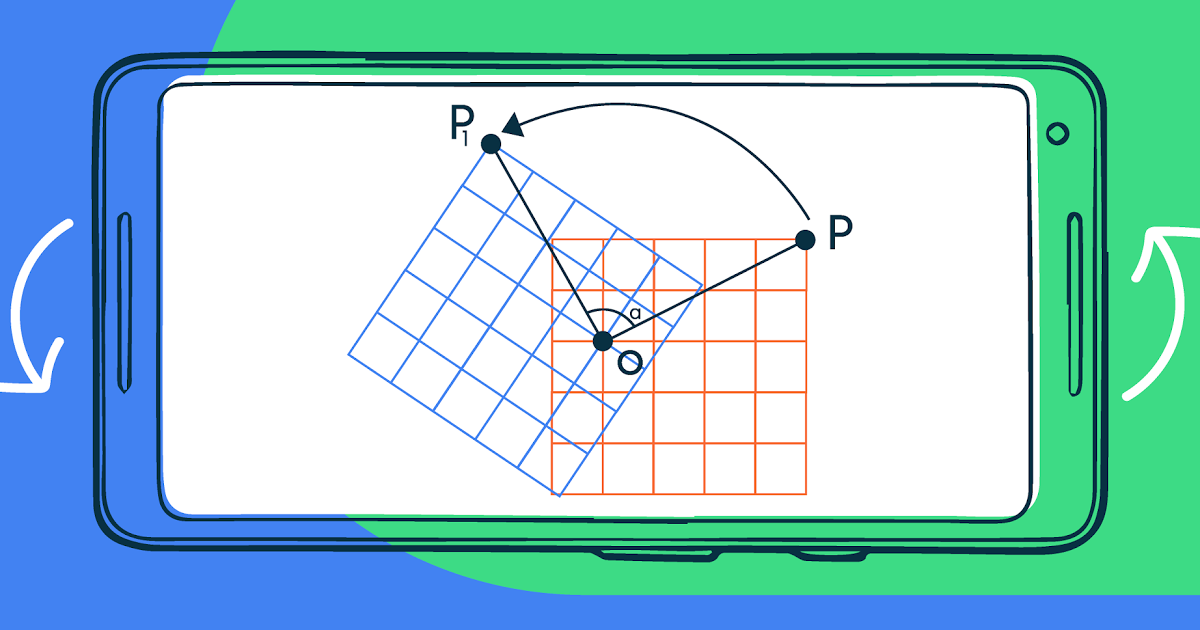 Vulkan provides developers with the power to specify much more information to devices about rendering state compared to OpenGL. With that power though comes some new responsibilities; developers are expected to explicitly implement things that in OpenGL were handled by the driver. One of these things is device orientation and its relationship to render surface orientation. Currently, there are 3 ways that Android can handle reconciling the render surface of the device with the orientation of the device :

What Does This Mean For Your Apps?

On Pixel 4XL, we have seen on shipping titles that SurfaceFlinger (the higher-priority task that drives the Android Compositor) both regularly preempts the application’s work causing 1-3ms hits to frametimes, as well as puts increased pressure on the GPU’s vertex/texture memory as the Compositor has to read the frame to do its composition work.

Handling orientation properly stops GPU preemption by SurfaceFlinger almost entirely, as well as sees the GPU frequency drop 40% as the boosted frequency used by the Android Compositor is no longer needed.

To ensure surface rotations are handled properly with as little overhead as possible (as seen in the case above) we recommend implementing method 3 – this is known as pre-rotation. The primary mechanism with which this works is by telling the Android OS that we are handling the surface rotation by specifying in the orientation during swapchain creation through the passed in surface transform flags, which stops the Android Compositor from doing the rotation itself.

In this post we will describe in detail how to implement pre-rotation and handle device rotation in your Vulkan application.

To handle device rotation in your app, change the application’s AndroidManifest.xml to tell Android that your app will handle orientation and screen size changes. This prevents Android from destroying and recreating the Android activity and calling the onDestroy() function on the existing window surface when an orientation change occurs. This is done by adding the orientation (to support API level <13) and screenSize attributes to the activity’s configChanges section:

Get the Identity Screen Resolution and Camera Parameters

The next thing that needs to be done is to detect the device’s screen resolution that is associated with the VK_SURFACE_TRANSFORM_IDENTITY_BIT_KHR as this resolution is the one that the Swapchain will always need to be set to. The most reliable way to get this is to make a call to vkGetPhysicalDeviceSurfaceCapabilitiesKHR() at application startup and storing the returned extent – swapping the width and height based on the currentTransform that is also returned in order to ensure we are storing the identity screen resolution:

displaySizeIdentity is a VkExtent2D that we use to store said identity resolution of the app’s window surface in the display’s natural orientation.

To know when the application has encountered an orientation change, the most reliable means of tracking this change involves checking the return value of vkQueuePresentKHR() and seeing if it returned VK_SUBOPTIMAL_KHR

For devices running older versions of Android below 10, a different implementation is needed since we do not have access to VK_SUBOPTIMAL_KHR.

On pre-10 devices we can poll the current device transform every pollingInterval frames, where pollingInterval is a granularity decided on by the programmer. The way we do this is by calling vkGetPhysicalDeviceSurfaceCapabilitiesKHR() and then comparing the returned currentTransform field with that of the currently stored surface transformation (in this code example stored in pretransformFlag)

A second option for devices running below Android 10 is to register an onNativeWindowResized() callback to call a function that sets the orientationChanged flag to signal to the application an orientation change has occurred:

Where ResizeCallback is defined as:

And within the OnOrientationChange() function we will do all the work necessary to recreate the swapchain. This involves destroying any existing Framebuffers and ImageViews; recreating the swapchain while destroying the old swapchain (which will be discussed next); and then recreating the Framebuffers with the new swapchain’s DisplayImages. Note that attachment images (depth/stencil images for example) usually do not need to be recreated as they are based on the identity resolution of the pre-rotated swapchain images.

In the previous section we mention having to recreate the swapchain. The first steps to doing so involves getting the new characteristics of the rendering surface:

With the VkSurfaceCapabilities struct populated with the new information, we can now check to see whether an orientation change has occurred by checking the currentTransform field and store it for later in the pretransformFlag field as we will be needing it for later when we make adjustments to the MVP matrix.

In order to do so we must make sure that we properly specify some attributes within the VkSwapchainCreateInfo struct:

It is important that the surfaceCapabilities.currentTransform field and the swapchainCreateInfo.preTransform field match because this lets the Android OS know that we are handling the orientation change ourselves, thus avoiding the Android Compositor.

The last thing that needs to be done is actually apply the pre-transformation. This is done by applying a rotation matrix to your MVP matrix. What this essentially does is apply the rotation in clip space so that the resulting image is rotated to the device current orientation. You can then simply pass this updated MVP matrix into your vertex shader and use it as normal without the need to modify your shaders.

If your application is using a non-full screen viewport/scissor region, they will need to be updated according to the orientation of the device. This requires that we enable the dynamic Viewport and Scissor options during Vulkan’s pipeline creation:

The actual computation of the viewport extent during command buffer recording looks like this:

The same computation can be used to also set the scissor test, and is included below for completeness:

If your application is using derivative computations such as dFdx and dFdy, additional transformations may be needed to account for the rotated coordinate system as these computations are executed in pixel space. This requires the app to pass some indication of the preTransform into the fragment shader (such as an integer representing the current device orientation) and use that to map the derivative computations properly:

In order for your application to get the most out of Vulkan on Android, implementing pre-rotation is a must. The most important takeaways from this blogpost are:

Here is a link to a minimal example of pre-rotation being implemented for an android application: