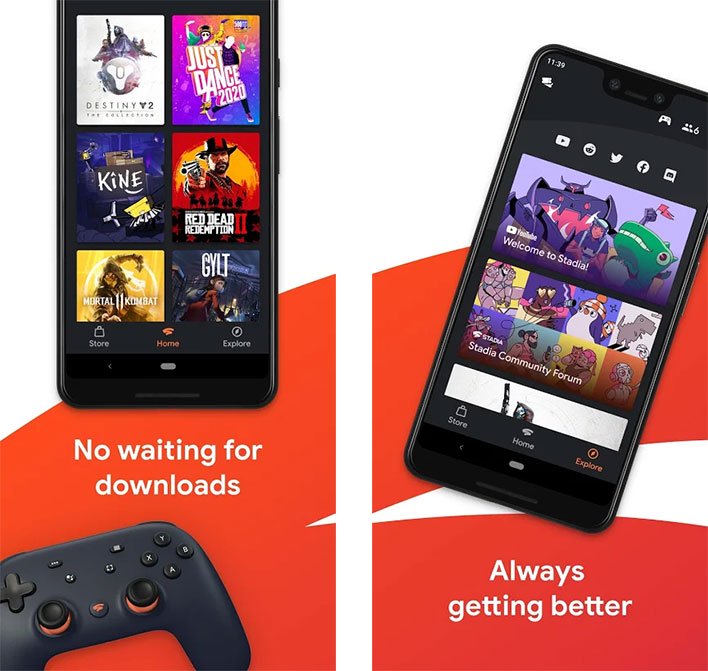 It as seems as Google is getting its ducks in a row in preparation for its Stadia cloud gaming service going live later this month. Ahead of Stadia’s launch on November 19, Google has made available a Stadia app for Android in the Play Store. Anyone who owns a compatible handset can head over there right now and download it.
Stadia will enable to gamers to play titles like Red Dead Redemption 2, Borderlands 3, and Cyberpunk 2077 (to name just a few of the bigger hits arriving on the platform) on desktops and laptops, on Chrome OS devices, and on televisions through a Chromecast Ultra dongle. It can also be played on Pixel 2 and later handsets.
In its current form, the Stadia app is listed at 73MB (version 1.45.278447916). Google also lists it as having already notched over 50,000 installs. As far as smartphones go, compatible handsets in the early going include the Pixel 2, Pixel 3, Pixel 3a, and Pixel 4 (regular and XL versions of each generation). Sometime after launch, Stadia will be available to more Android devices, and on iOS handsets as well.

Users who want to download and install the app will also need to input a code that was sent out when preordering the Founder’s Edition or Premiere Edition. Google also provided “Buddy Passes” to hand out to friends when preordering, and those will work as well.

According to 9To5Google, the Home tab in the app displays all of your games, each with a play button, There is also an Explore tab that looks like it will show community posts, along with various social icons at the top (YouTube, Reddit, Twitter, Facebook, and Discord).

The Founder’s Edition is no longer available, though the Premiere Edition is available to preorder for $129. It includes a Chromecast Ultra dongle and three months of Stadia Pro, which is the paid subscription tier. Stadia Pro supports playing games at up to 4K in 5.1 surround sound. It also will include regularly released free games (starting with Destiny 2: The Collection) and exclusive discounts on game purchases.

There is also a free Stadia Base tier that supports playing games at up to 1080p in stereo sound. It does not come with any free games or exclusive discounts.