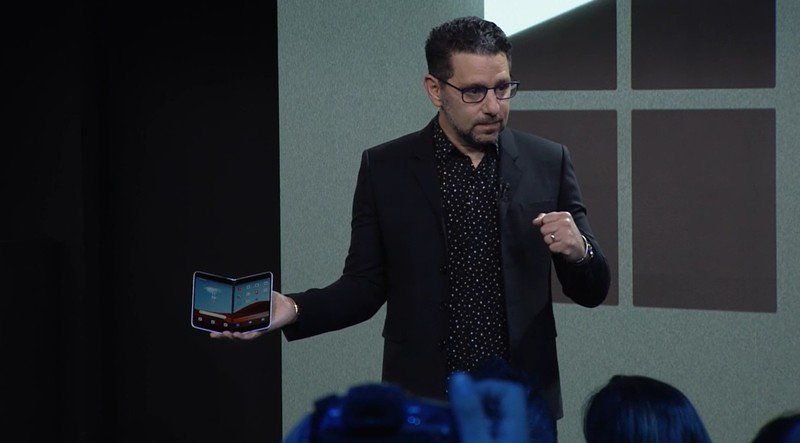 At Microsoft’s massive Surface event this week, the firm unexpectedly revealed Andromeda, now known as the Surface Duo. Complete with Android and Google Play, the Duo has a folding 360-degree hinge that allows the device to be used as both a phone and a tablet. We’ve written about the potential user scenarios for years, and Microsoft showcased a few in its sexy teaser video. Tent mode for media consumption. Angled up 90-degrees as a Project xCloud game streaming handheld, side-by-side multitasking, and so on.

Despite Microsoft’s protests that the Duo is simply a “Surface,” and not a “phone,” the entire world will see it just as it is — which is a phone. Phones come with specific expectations attached to them in 2019. People have already decried the chunky bezels, as Surface betrays the edge-to-edge display trends espoused by Samsung, OnePlus, and other Android vendors. The whole reason Windows 10 Mobile failed was the big glaring app-gap, with contemporary services avoiding the platform altogether. It effectively forced Microsoft to adopt Android for this incredible piece of tech. As phones go, the Duo had a specific glaring omission in its press materials. The lack of a rear-firing camera.

So, will the Surface Duo have a “real” camera, or simply rely on the front-facing camera wrapped around? Will that be powerful enough? Surface lead Panos Panay offered some comments on the topic in a recent interview.

Not the finished product

The Surface Duo we saw at the Surface event is by no means the finished product, which makes it hard to estimate for sure what kind of features it will or won’t have, besides that gorgeous folding form factor. However, Panay has dropped hints in some interviews that Microsoft has more tricks up its sleeve when it comes to cameras for Surface. Speaking to Wired, Panos Panay said that they were nervous about revealing too many details about the camera at this stage, wanting to keep competitors out of the loop.

“These are our efforts for the past two and a half years, so there’s a balance to the number of details I can give, even with regards to the camera (…) The idea is, I want to help you become more creative and productive, that doesn’t mean a bajillion-megapixel camera on the back of the product. It means I get you into the flow, so you can create, you don’t have to switch out of context.”

In a preview video with Marques Brownlee on YouTube, we got a glimpse of Panay’s black prototype Surface Duo, complete with a cut out for a camera module. This at least suggests Microsoft is exploring ways of getting a more serious camera into this thing, and could also help explain the need for hefty bezels, as the requirement for thinness squashes components out from behind the display portion of the device.

Patents dating back years seem to detail various methodologies Microsoft has been exploring for squeezing cameras into what is effectively two extremely thin phones, adding credence to the idea that indeed, we haven’t seen everything Microsoft intends to ship with this device.

All signs point to “probably”

It feels incredibly unlikely to me that Microsoft would produce a ground-breaking product, complete with a partnership with Google, and not include at least some baseline level of contemporary camera tech. We’ve seen shoddy cameras bury fairly innovative Android handsets like the Razer Phone, and no amount of side-by-side screen multi-tasking will make up for a phone that produces grainy images.

In the same Wired interview above, Panay spoke about not having to reach for additional devices to complete your creative flow. If you’re someone who likes taking pictures, I can’t imagine anything more interrupting than having to put down your Surface Duo to pick up another phone with a decent camera, if a photo opportunity presents itself.

The idea of the Duo not having a decent camera seems to betray Microsoft’s own vision for the device, but indeed, we won’t know for sure until we get our hands on it in the Holiday of 2020.