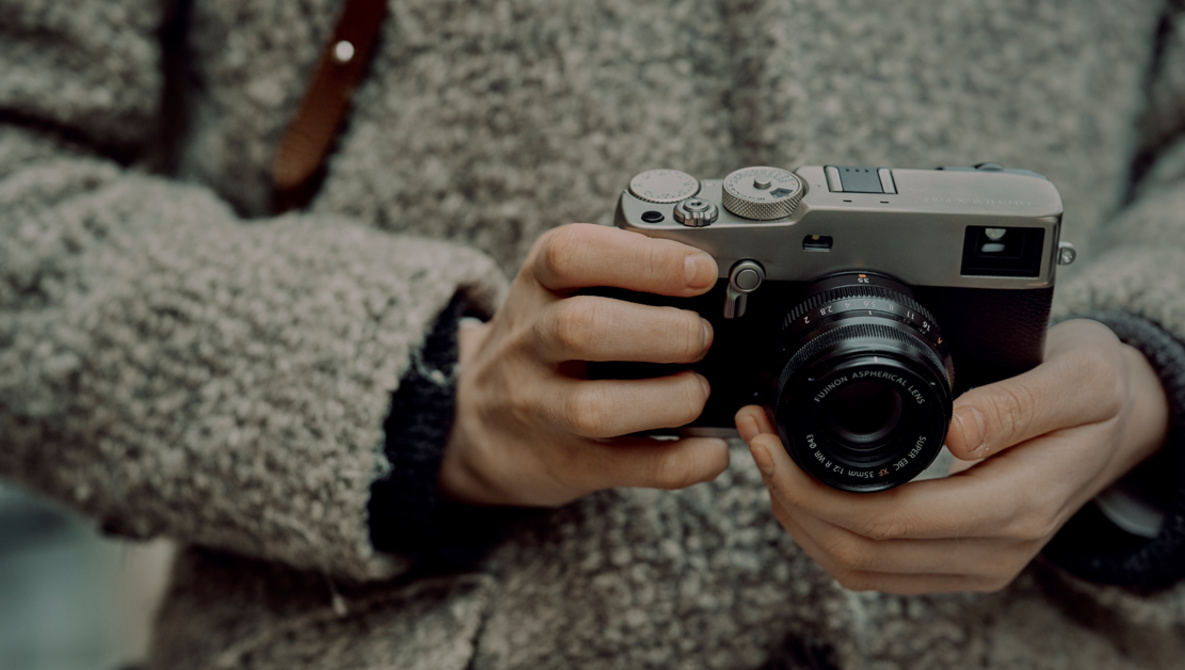 There is no getting away from it: Fujifilm’s decision to implement a “hidden LCD” on their brand new Fujifilm X-Pro3 camera was always going make this a divisive camera. The question is: has Fujifilm created such a niche camera as to make it unusable? After using the camera extensively for the past couple of weeks, here is my purely personal take on this very personal camera.

The Same, but Different

As the naming convention would suggest, the X-Pro3 is the third iteration of Fujifilm’s rangefinder style camera. It builds not only on the success of previous versions of the same model, but also upon other models from their X Series line of cameras.

It uses exactly the same 26.1MP APS-C X-Trans 4 sensor found on the Fujifilm X-T3 and Fujifilm X-T30. So much has been written about this sensor that there is no need to repeat it all again here. Suffice to say, the X-Trans sensor has so matured over the years; you just know it will produce simply fabulous photographs.

The hybrid optical/electronic viewfinder found in the Fujifilm X-Pro2 and Fujifilm X100F is back, this time with a few incremental improvements. The X-Pro3 also uses the same menu system as the other cameras in the X-Series range, meaning existing users will immediately feel at home. Even the NP-W126S batteries are exactly the same as used on the X-T3, X-T30, X100F, and so on.

So far, the same. Where this camera really starts to get interesting is where the X-Pro3 differs from its sibling cameras.

So, let’s just deal with the elephant in the room, the hidden LCD screen. Instead of the forward-facing, fixed screen of previous versions, the X-Pro3 features a 180-degree, flip-down LCD monitor, which hides away behind the back panel when not in use.

In its place, Fujifilm has implemented a small, forward-facing, sub monitor reminiscent of the top display of the Fujifilm X-H1. By default, the sub monitor displays the current film simulation, a clear nod to the old practice of slipping a piece 35mm film packaging into the back of the camera as a reminder of which film had been loaded. it’s a nice touch, but personally, I quickly changed this to display common camera and exposure information, which I found more useful.

I must admit, I had some initial reservations about the hidden LCD. With this camera, Fujifilm clearly want to take away as many distractions as possible, allowing photographers to really engage in the moment. How many photographers this will appeal to remains to be seen, but I have to say that after using the camera for a while, I have really enjoyed the shooting experience it brings.

That experience hasn’t been without a few hiccups though. It definitely took me a while to get used to having to open up the LCD, especially when using the menu system. I am so used to pressing the menu button and looking at the screen that I often did the same with the X-Pro3, only to find myself staring at the little sub monitor instead of a menu system. I did this enough that I kind of wish Fujifilm would just allow the menu to be displayed on the sub monitor. Maybe this is something for a future firmware update.

In use, I actually prefer prefer the way the screen opens on the X-Pro3 compared to the X-T3, especially for shooting down low or from the hip. This is mainly due to the physical design of the two cameras. The viewfinder of the X-T3 sticks out quite a way, partially obscuring the LCD, especially at 90 degrees. The viewfinder of the X-Pro3, on the other hand, is much more flush to the body, allowing the entire screen to be seen.

Where I found the design of the LCD did get in the way was when I mounted the camera onto a tripod. With the flip down nature of the articulation, the tripod restricted the range motion of the screen was able to achieve, limiting it to not much more than 90 degrees, which was a bit annoying.

Truth be told, though: I didn’t find the lack of a forward-facing LCD to be an issue, and within a day or two, I wasn’t missing the screen at all.

There is no doubt about it: the X-Pro3 is a beautiful camera. Reminiscent of the rangefinder cameras of old, its minimalist design lends itself to the nostalgic experience of shooting with an X-Series camera.

In the hand, the X-Pro3 feels very well balanced, helped by a slightly redesigned grip to improve the overall handling. This is very much enhanced by the tactile nature of the exposure dials, which I love, although I recognize many other photographers dislike.

Beauty aside, this is a really tough camera. With a body made of magnesium and top and bottom plates made of titanium, this camera will likely laugh in the face of any amount of abuse you care to throw at it. Anyone wanting absolute maximum protection can opt for the optional Duratect coating, which comes with a slight price bump but makes the X-Pro3 practically impossible to scratch. Add to that the obligatory weather-sealing you would expect of any 2019 camera, and you have a camera that nobody is going to worry much about being thrown in and out of a camera bag on a rainy day.

The X-Pro3 brings with it quite a few changes to the button layout of previous versions. Most noticeably, the D-pad has been removed. It’s a decision which seems to have annoyed quite a few users. Realistically though, this is the direction Fujifilm has been moving in for a while in their pursuit of the cleanest possible design. Given that every button on the camera can now be customized to suit individual user preference — even the Q menu button is no longer locked to the Q menu — I didn’t find the loss of the D-pad to be an issue.

Talking of the Q menu, this has now been updated to not only allow the ability to customize what each menu tile does, but also how many tiles to display. I really like this. I always found the fixed 12 tile Q menu layout to be a little too crowded and usually set most of the tiles to be empty. Now, I can chose to display as few as four and as many as 16 items on the Q menu. The Q Menu can also be set against either the standard black background or a new transparent background, which allows adjustments to be viewed in real-time. In use, I found these tweaks to make the menu much more useful.

The X-Pro3 introduces a number of new or improved processing options. In-camera HDR, the ability to tweak clarity, and to adjust highlights and shadows using a single tone curve setting are all welcome additions. A new “Classic Neg” color profile joins the existing lineup of film simulations that are so popular with Fujifilm shooters. I’m sure it won’t take long for Classic Neg to make its way to other X Series cameras via a firmware update, but for now, the X-Pro3 is the only camera to feature this new simulation.

Autofocusing has always been excellent with Fujifilm cameras, and the X-Pro3 is no different. Face and eye detection work well, and improved phase detection allows focusing in light conditions as low as -6 EV. That’s crazy dark. I wasn’t able to fully test the veracity of that claim, but certainly, I was able to autofocus in conditions that the X-Pro2 couldn’t have handled. Overall though, I found autofocus ability of X-Pro3 wasn’t quite up to that of the X-T3, but in practice, the difference between the two was marginal.

When it comes to video, it’s probably fair to say this is an area where the performance of the X-Pro3 is less than stellar. Sure, the X-Pro3 can shoot around 15 minutes worth of 4K, 30p, 200 Mbps video, but let’s be honest, nobody is going to want to shoot anything but b-roll with this camera, and even thenn only at a push. No, this is a stills camera through and through, and it is shooting stills photography where this camera comes alive.

As cliché as it sounds, some cameras just make you want to go out and shoot more, and the X-Pro3 is exactly one of those cameras. While I absolutely love my X-T3, the shooting experience with the X-Pro3 just seemed to feel that much more connected.

So, where does that leave us? We know the X-Pro3 was always going to be a fabulous camera. The X-Series ecosystem has matured so much over the years, and Fujifilm knows how to build a camera, so the quality of this camera was never in doubt. The real question is: who it is being aimed at?

Fujifilm claims their design intention with the hidden LCD was to encourage a more traditional style of shooting, allowing photographers to stay in the moment rather than constantly chimping their images after each shot. Personally, I am not sure how much I buy that explanation. Experienced photographers, especially the street and documentary photographers this camera is largely aimed at, will likely not be in the habit of excessively chimping. And less experienced photographers will probably not be buying this camera in the first place. So, it seems to be a solution to a problem that didn’t really exist.

Rather, I believe the choice to implement the hidden LCD was made to achieve one clear objective: to differentiate the X-Pro3 from all the other cameras on the market. It should be remembered that when the X-Pro range first launched back in 2012, the mirrorless market was decidedly sparse. Today, that market has become very crowded indeed, with every manufacturer offering at least one serious mirrorless system.

With three flagship products within their own lineup, not to mention all the other cameras on offer from other manufacturers, Fujifilm had to take some bold steps if they want the X-Pro range to establish (and maintain) its own personality. With this update, they have done exactly that, squarely positioning this as the camera for the photography purists.

Personally, I love the design choices Fujifilm has made with this X-Pro3. As a travel and documentary photographer, I fall exactly within the target audience of this camera. I almost never use a touchscreen, I rarely frame my photographs using an LCD, and I much prefer the discrete look and feel of this camera over some of the flashier alternatives. So, for me, the minimalist design and the backward-facing LCD are very attractive features. I totally understand that many other photographers will totally disagree with me, and that’s ok.

The X-Pro3 isn’t a camera for everyone; it is now very much a niche camera. Those it appeals to will absolutely love it, and for those who want a different experience, Fujifilm (and all the other camera manufacturers) has plenty of other options. As photographers, we should all welcome having so much choice.