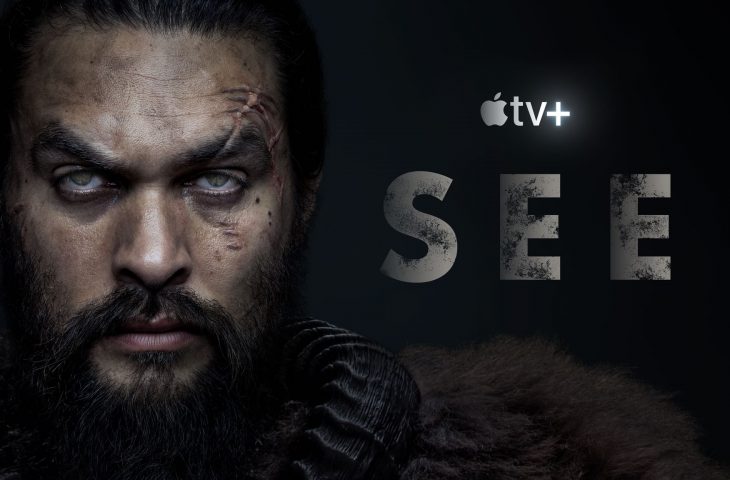 See is Apple TV+‘s first attempt at grandiose storytelling on an “epic” scale. It’s been compared to HBO’s Game of Thrones more than a few times. Will the show be able to live up to that lofty expectation? The first episode certainly tries.

[Editor’s Note: This review will include some minor spoilers for the first episode, but it is not meant to be a total recap of the episode’s events.]

The details to get out of the way first: See is a post-apocalyptic sci-fi fantasy series, a drama that sees what’s left of humankind unable to see following a virus that ravaged the earth. The series picks up when two children are born with the ability to see, and how that will potentially change the very livelihood of everyone on the planet.

Jason Momoa (Game of Thrones, Aquaman) plays Baba Voss, a leader of a village. The series also stars Sylvia Hoeks (Blade Runner 2049) as Queen Kane, Alfre Woodard (The Lion King) as Paris, and many others.

This episode was directed by Francis Lawrence.

I’m just going to say it: this show is crazy. It’s been centuries since the virus ravaged mankind and everyone’s blind, sure, but we can’t ignore the fact that people have adopted more magically-inclined lifestyles. Characters talk about hearing secrets and lies, and there are witches that some people fear.

Also, the production costs on this show had to be remarkably high because it’s a shining point for the show so far. It’s only the first episode and you can just see (no pun intended) that the production costs were considerable. Not that necessarily means this is a good show, mind you. But at least it looks realistic enough for the setting that’s presented to us.

And if you like looking at green scenery, mountains, fog, and water, well, See is genuinely beautiful to look at.

The dialogue can be hard to follow sometimes, but I don’t hold that against the show because I enjoy the fact it’s just tossing us into the deep end. That goes for the fact that the village of Baba Voss is about to be under attack while his wife is giving birth to her children. You’re just right there, no preparation beyond the brief text-on-screen telling us the events from centuries ago that brought us to this point.

This could be potentially daunting to some viewers and I understand that wholeheartedly. For me, though, the fact that the show doesn’t hold our hand as it takes us into this world is a bonus. Plus, we get to see Baba Voss and the warriors of the village do a ceremonial dance similar to the Maori’s haka, and it’s pretty great.

As far as performances are concerned, it’s obvious that everyone is giving it their all, but no one really stands out in any real way in the first episode. Everyone’s tough in their own way, or dramatic, and it’s all borderline heavy-handed.

There’s a brief moment where the leader of the Witch Finders (the group that’s hellbent on invading Baba Voss’s village, looking for Voss’s wife and her child) interrogates a traitor and it’s not that compelling to sit through, mostly because it feels like the traitor is just coasting through the lines.

One of the things I was most interested in, especially for a series like See, was the combat. As far as expectations go (they were not high), I can say that the series excels in this regard. Keep in mind that everyone that’s fighting in these scenes is “blind”, so there will be moments that seem kind of incredible (like when you see a person deftly block an incoming attack from someone who’s standing still, something that would be difficult enough with sight). But honestly, for the most part, the fighting is visceral and you’re right there alongside the combatants for most of it.

This is one of the elements of the show I was most concerned about and I can say that that fear has been abated. Granted, it could all revert to being awful, jump-cut garbage in the later episodes, but I’m hopeful that’s not the case.

And it’s violent, too. The series is rated TV-MA in part for this reason, so you’ll see blood and watch people violently murdered, so if that’s not your thing just keep in mind the camera doesn’t shy away from it.

(“That’s not what the owls tell me,” is a real thing that Paris (Woodard) actually tells another character, and this is not played for laughs. It’s a serious thing said very seriously and you should take it seriously, too.)

The bridge scene, if you put yourself in the characters’ shoes, is pretty intense. Albeit brief.

I genuinely like the fact that the people in this universe have heightened senses due to the fact they have lost their sight. Some characters can hear better than others, like one character can hear how many heartbeats people are away. Others can sense fear and anger. It’s an interesting addition, and I can’t wait to see how this plays out in future episodes.

There really isn’t anything beyond the production design that’s outright incredible about the first episode of See, but it is also not awful by any means. At least, not the first episode. It seems genuinely entertaining enough, It’s all kind of ridiculous in a good way, like a solid sci-fi/fantasy series should be (let’s not pretend that Game of Thrones was not also ridiculous in its own way). It can also be funny but in the not-on-purpose way, which is probably not what they were aiming for, unfortunately.

But will that carry over to the completion of the series? We’ll have to wait and see.

I’ll give the first episode of See a thumb’s up and say that I’m genuinely interested to see what happens next, which is all that a series can ask for.