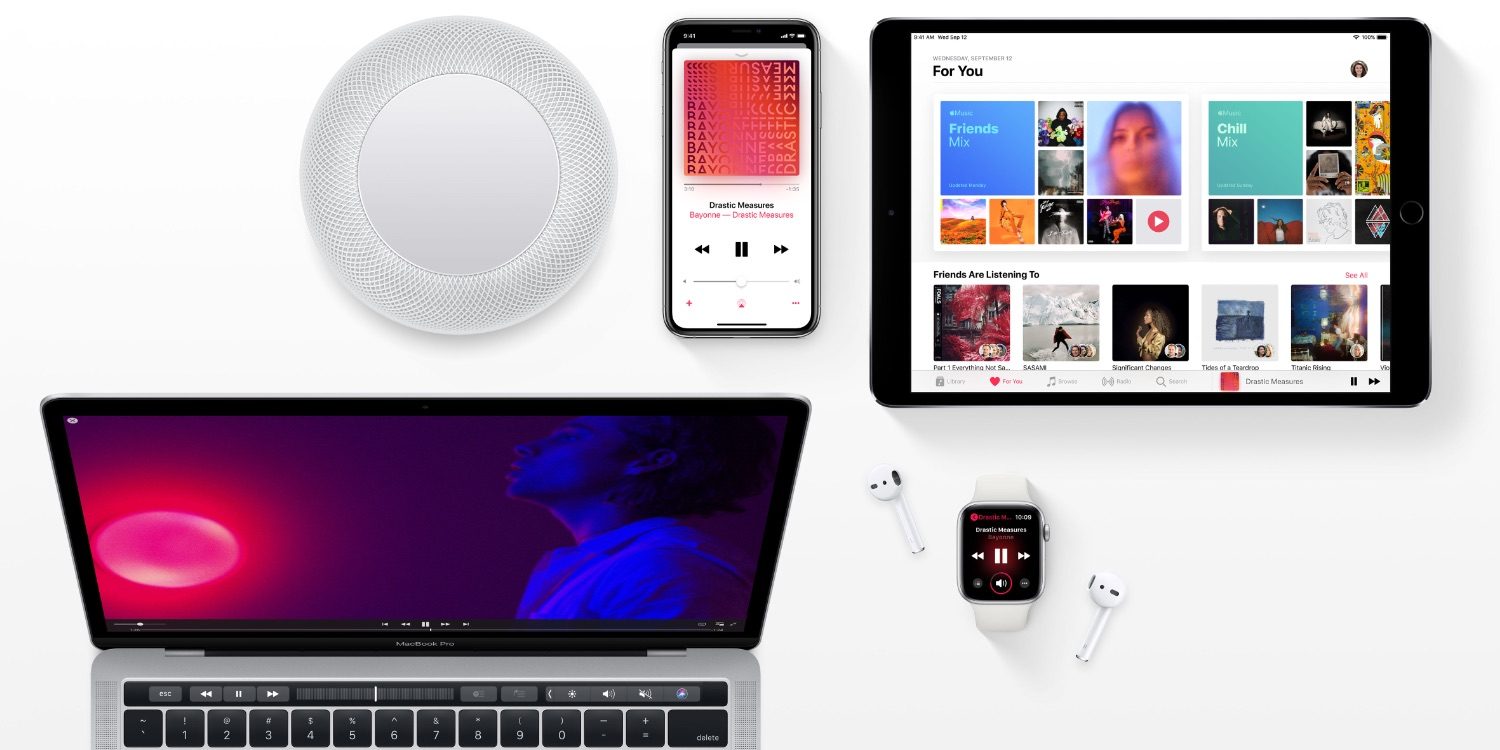 The big news this week is that this fall may finally be the beginning of the end for iTunes. 9to5Mac’s Gui Rambo independently confirmed that the next major version of macOS will introduce standalone Music and Podcasts apps on the Mac. iTunes is expected to stick around for now, which suggests Apple’s new apps won’t include every legacy feature, but iPad-based versions of Music and Podcasts would actually introduce features to the Mac that aren’t available yet.

Music and Podcasts for macOS

Based on our reporting and what we’ve seen so far, we should expect versions of the Music and Podcasts apps that run on the iPad to be adapted to the Mac in macOS 10.15 later this year.

iTunes isn’t expected to be removed so diehard fans can continue using the app, but we probably shouldn’t expect continued development of iTunes in a world with Music and Podcasts apps on the Mac. Think iPhoto to Photos transition.

With Music, Podcasts, TV, and Books, the situation is a bit different. iTunes will remain as a fallback while the old version of the Books app will likely be replaced (and a few Mac-specific features likely discontinued). The new media apps will practically replace iTunes going forward though, but there are few users who just love using iTunes in 2019.

The biggest test of “Marzipan” will be when an existing Mac app that isn’t used begrudgingly is replaced with an iPad-based version with no fallback option for upgraders. We’re still not there yet though.

With Music expected to come to the Mac as a standalone app based on the iPad version, we can point to several existing features and design choices on iOS today that would be welcomed on the Mac.

For example, saved Apple Music playlists look way better in the Music app than iTunes where they’ve been squeezed into the sidebar and can’t be viewed like albums. 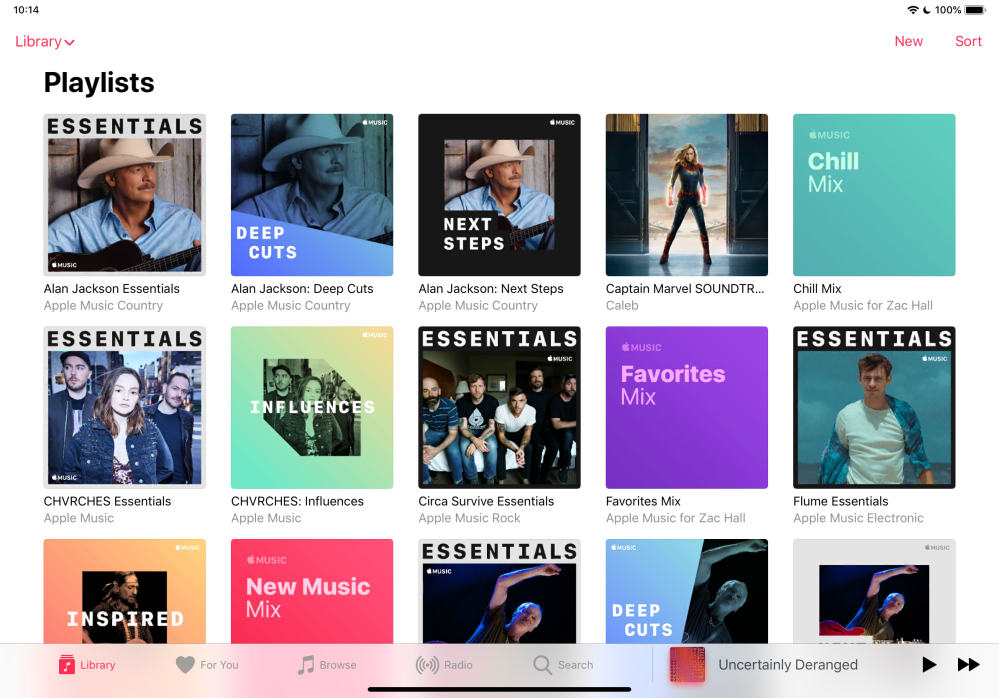 And here’s the Mac version crammed into the left sidebar under Apple Music Playlists: 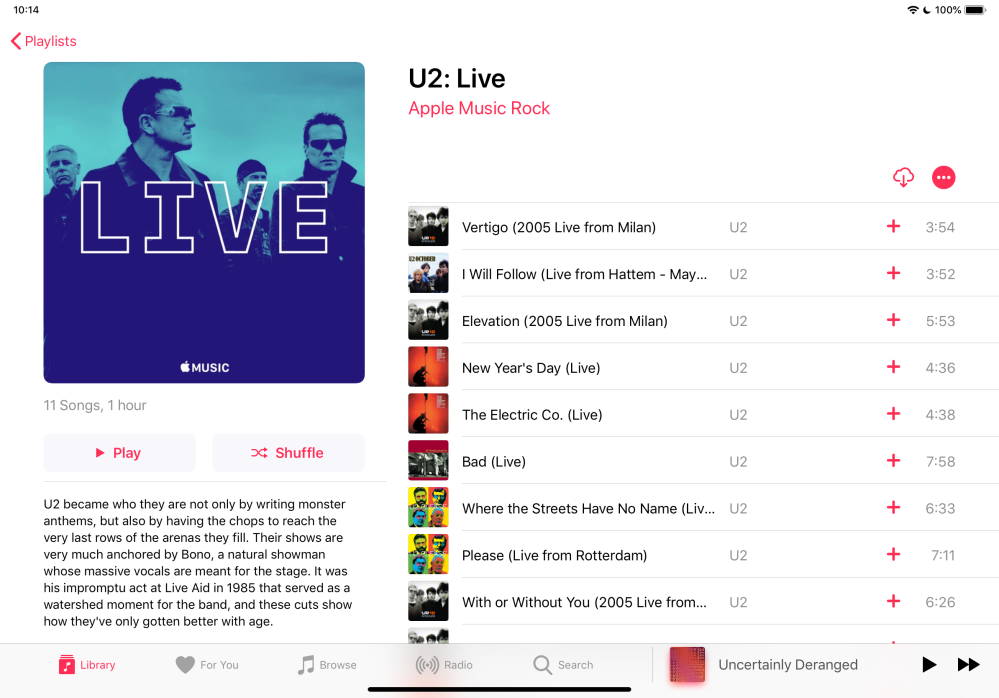 The Music app on the iPad also makes finding lyrics on Apple Music much easier than the iTunes app on the Mac. Just swipe up on the Now Playing screen and Lyrics are an option when available: 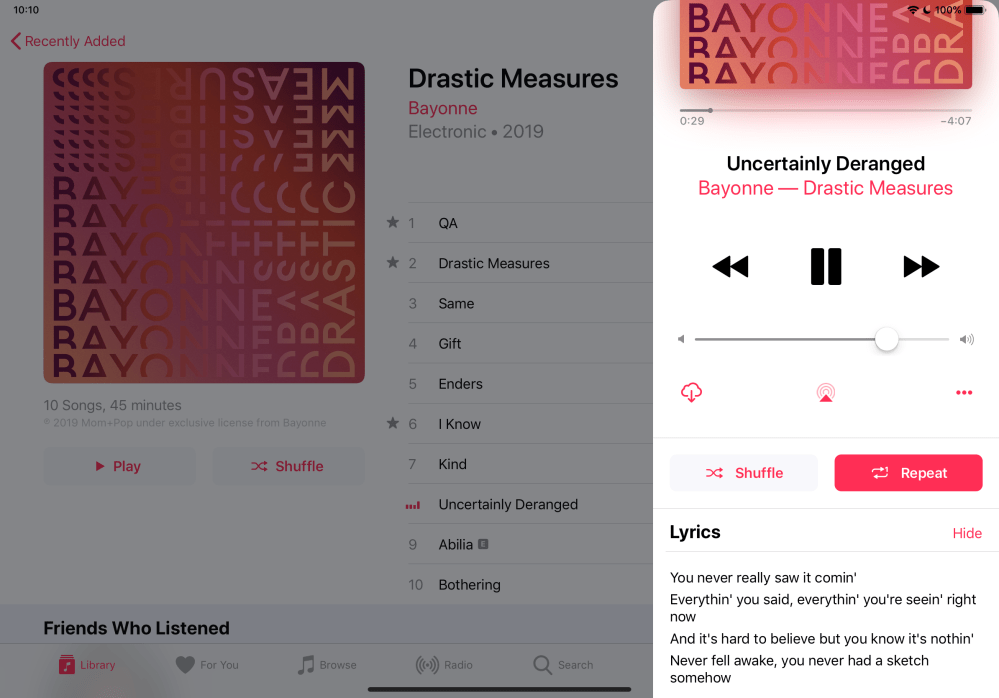 Lyrics are supported on iTunes, but they’re buried in an info panel or from the Mini Player: 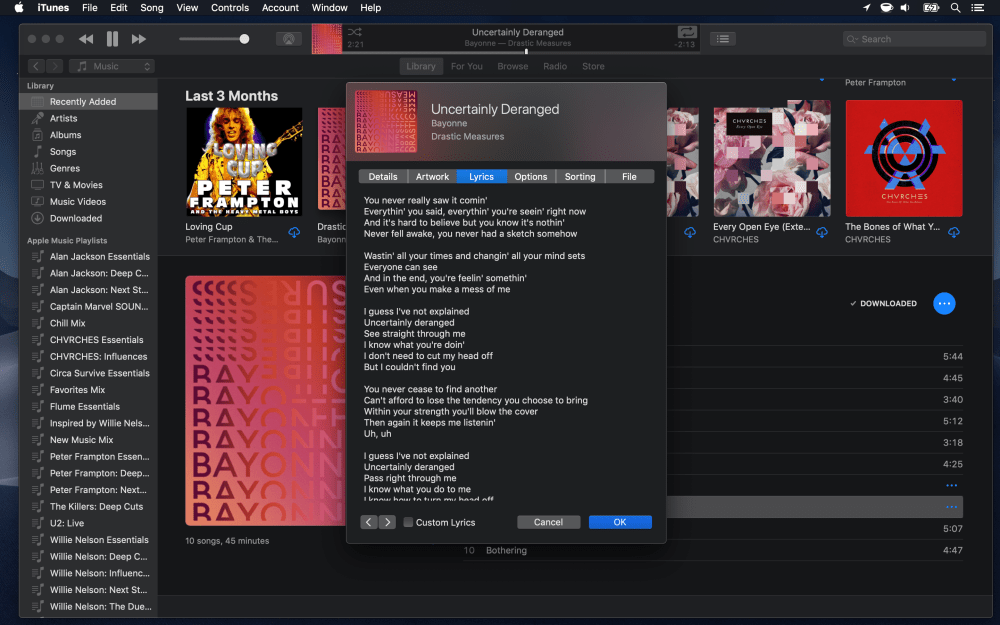 Before researching for this piece, I couldn’t have told you with confidence that lyrics were even supported on the Mac. In a redesigned iPad app, we might expect to see a persistent sidebar and top window navigation replace the modal popup window for Library and the current tab bar for different sections. That change alone will make the iPad Music app feel like less of an afterthought and more of an intentionally designed app for a large screen.

Mac features not on iOS

There are lots of music-related features included in iTunes that aren’t yet available in the Music app on iOS though. Some features are fairly new like Dark Mode and are expected system-wide in iOS 13 anyway. Other features are legacy features that could be missing in early versions of Music for macOS or never added.

For example, the Mini Player totally relies on the concept of windowed apps that doesn’t exist on the iPad. I doubt we’ll see a special version of it just for Music for macOS at launch. Crossfades between songs is a music-specific feature on iTunes that has been missing from Music on iOS since the first iPhone. iOS 13 would be a great time to introduce the feature that’s already available on Spotify for iOS. 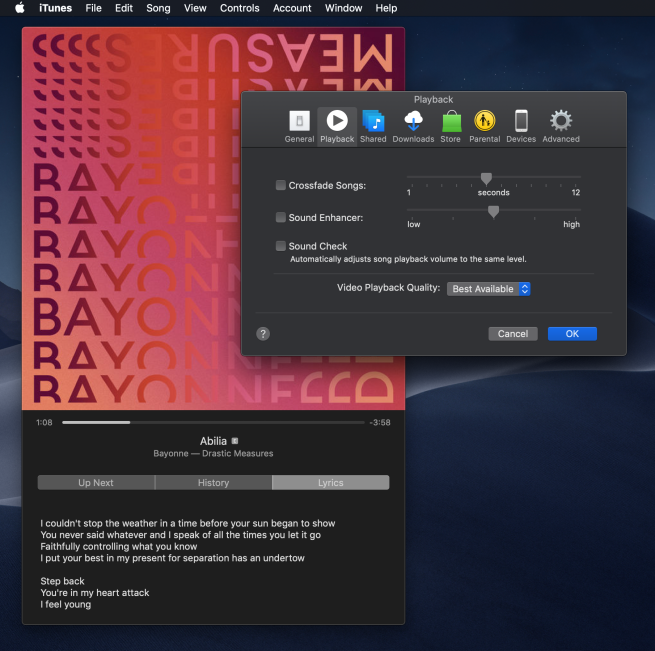 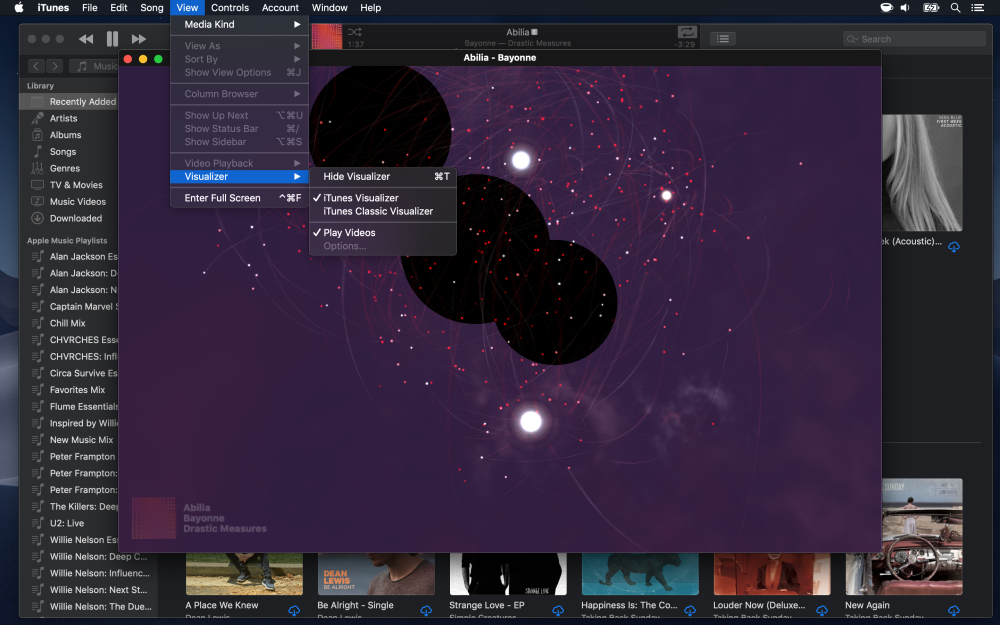 Then there are power user features for managing your music library that iTunes supports but feel foreign to the Music app. Like viewing technical details about audio files or changing metadata manually or even viewing play counts. 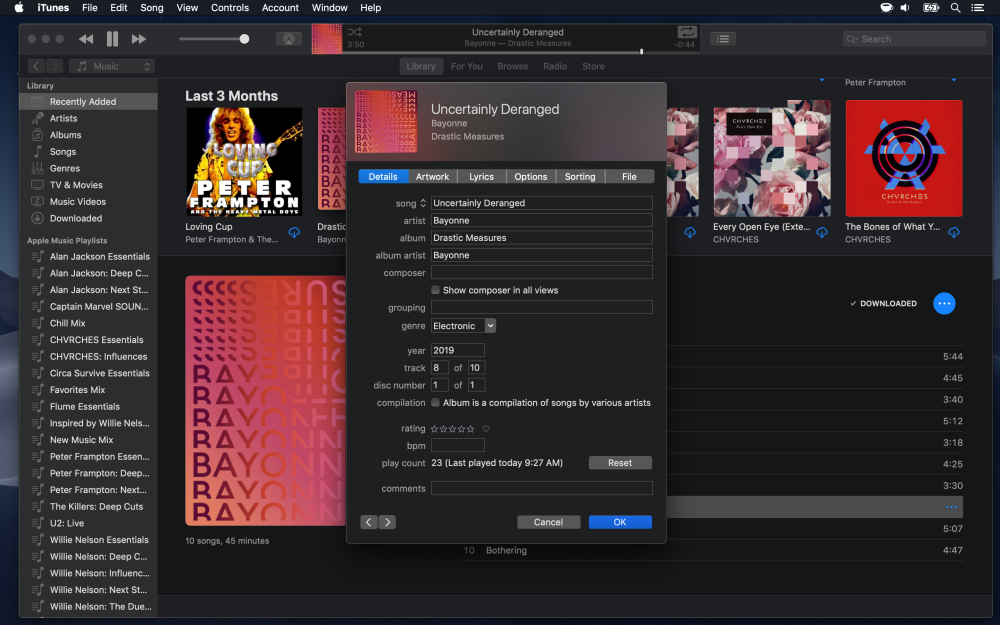 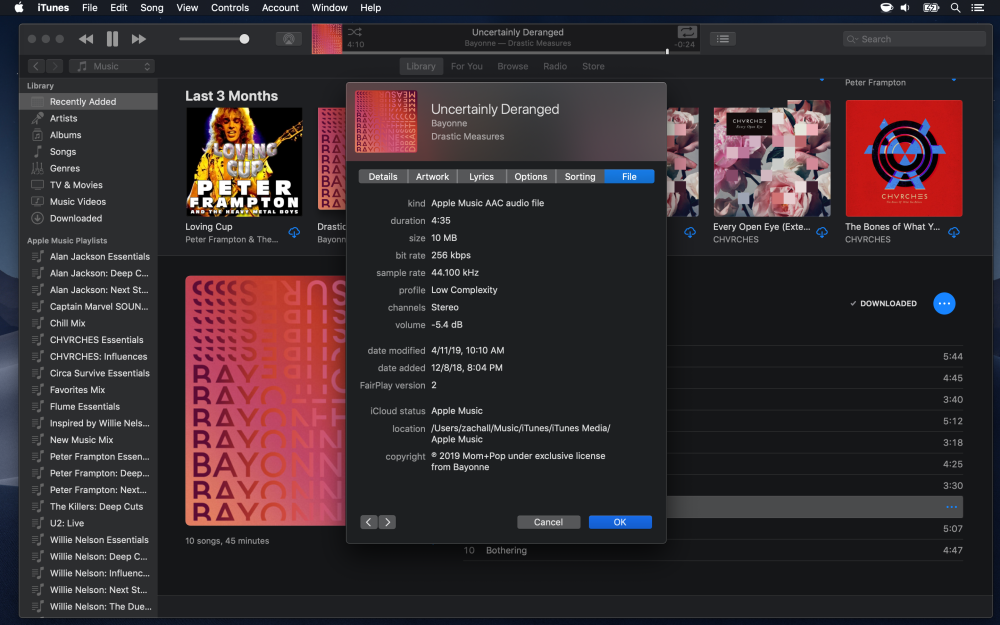 These features would be very welcome on the iPad, but they aren’t available yet. These could easily be saved for future versions of the Music app after the first version makes the platform leap.

The same is true for managing Smart Playlists based on metadata with iTunes. Will we ever see these features in the Music app, or will we need an old copy of iTunes going forward to use Smart Playlists? 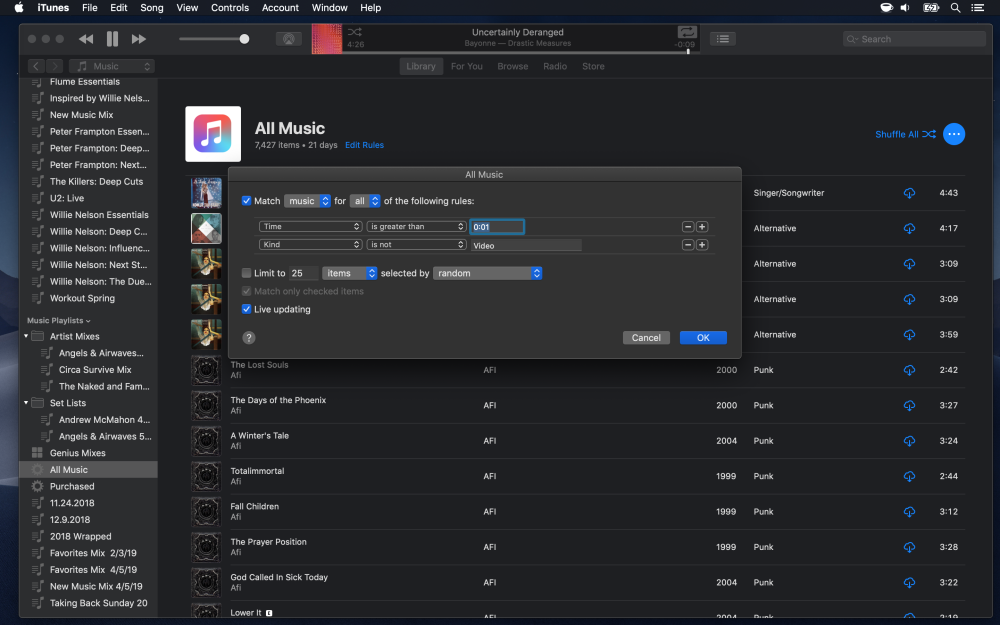 My favorite Smart Playlist is actually a workaround solution to the inability to download all music on iOS with one tap. The Smart Playlist includes rules that catch every song in my library, then the playlist syncs with iCloud to the Music app, and playlists do have a single ‘download all songs’ button.

iOS has added features that let you manage automatic downloads with certain song limits, but it’s not as clear-cut as a ‘just download everything on my large storage iPhone or iPad’ button. 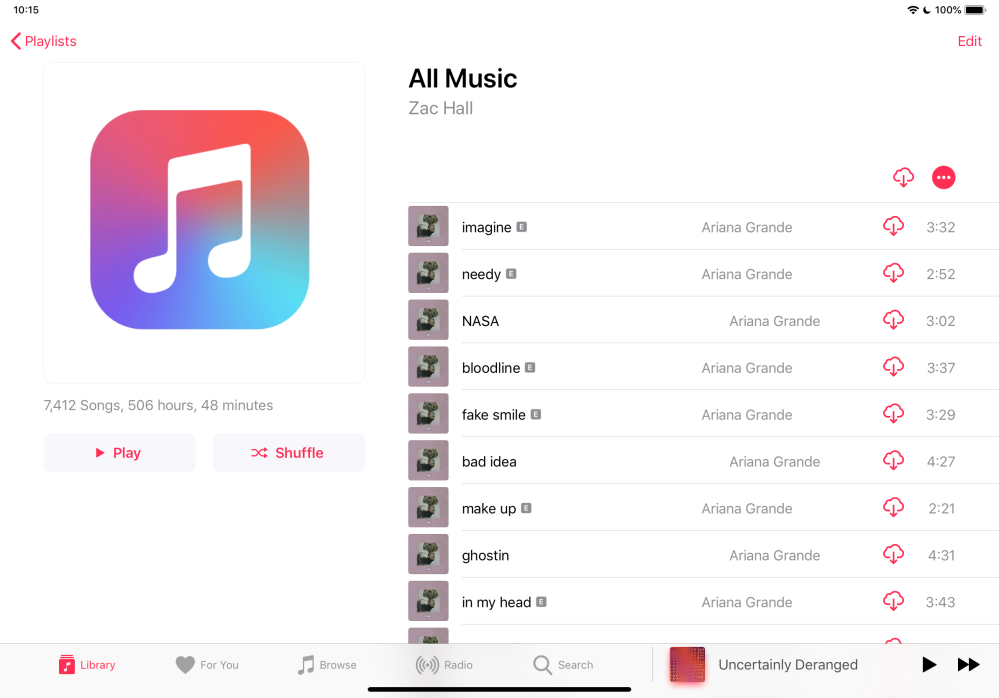 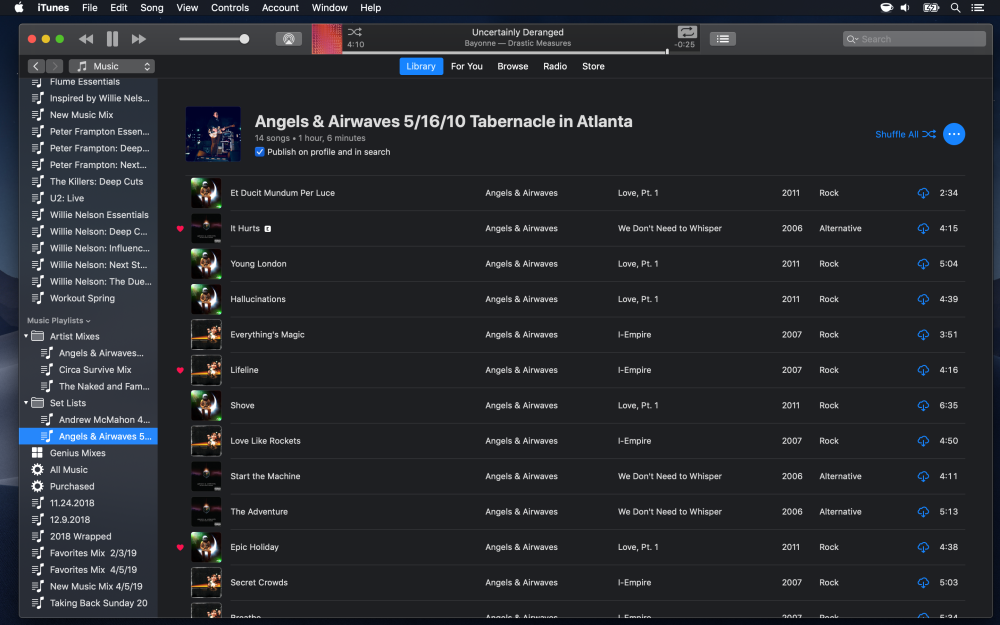 Playlist folders would be simple to add on the Music app though, especially since they’re already viewable once created on iTunes. 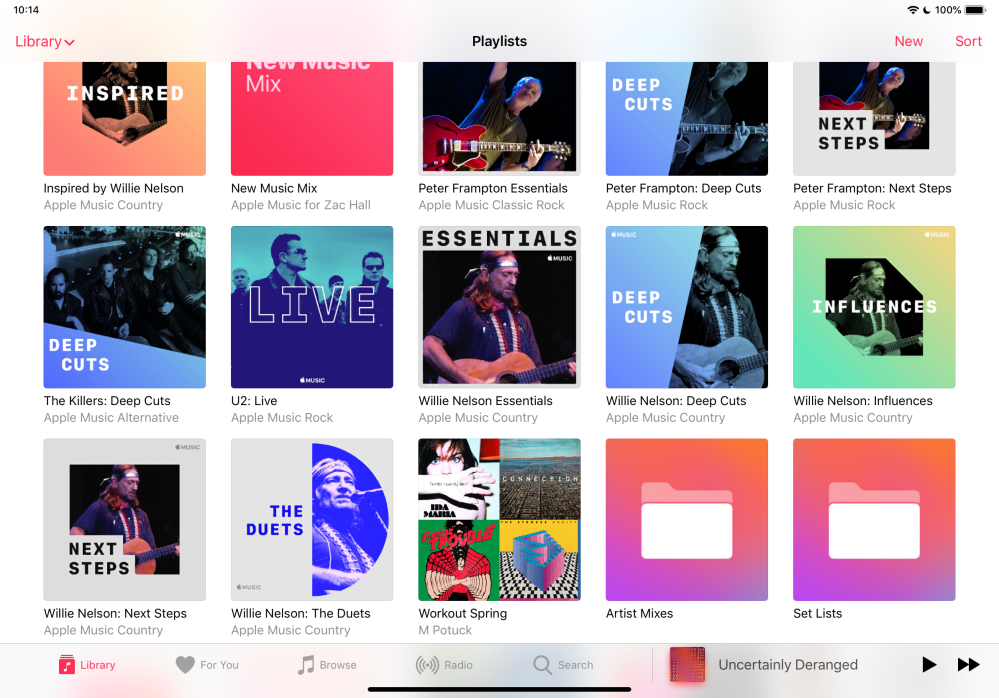 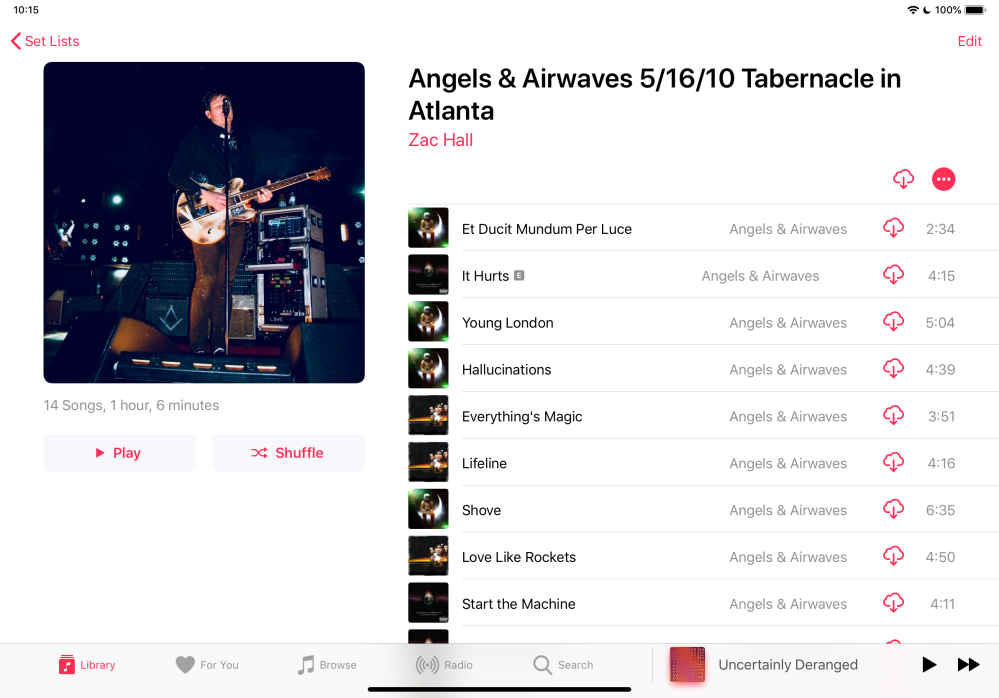 This is the type of feature that might never be considered for the Music app on iOS, but could be included if the goal is matching features for the sake of Music on macOS replacing iTunes.

iTunes might be a utility for pro users who want power features for the next several years, but eventually the app won’t work anymore without maintenance and the Music app should serve everyone.

Frankly, I can tolerate the Apple Music experience inside iTunes, but the Podcasts experience in iTunes has been in a sad state for years. Three years ago, I detailed loads of opportunities that a standalone Podcasts app could solve for users.

Podcasts are currently crammed inside the music player with a sidebar that’s tuned for music but needed for navigation, cross-fading music means cross-fading podcasts, and there are plenty of standard podcast controls and features not supported like 15- and 30-second skip buttons and chapter markers.

Unless you’re married to the idea of a single monolithic app for all your media, there are zero downsides to an adapted version of the iPad Podcasts app joining the Mac.

One feature that the iTunes Podcasts section had that was missing on iOS was a clearly labeled ‘Mark as Played’ button, and even that’s been added in a recent iOS update.