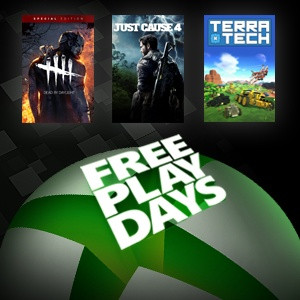 Through this weekend, Xbox Live Gold members can play a fantastic variety of titles from horror to action to creation. Survive or kill in adrenaline-filled matches from iconic horror films in Dead by Daylight: Special Edition. Experience explosive action in a large, open world in Just Cause 4. Design and build your own creations in a sandbox adventure game in TerraTech. This weekend, the choice is yours!

You can find and install the games here on Xbox.com. In the Microsoft Store, you must be signed in to see the option to install with your Xbox Live Gold membership. To download on console, click on the Gold member area on the home dashboard on your Xbox One.

If you like what you’ve played and want to keep the fun going, the games are available for purchase at a discount so you can continue playing while keeping your Gamerscore and achievements earned in-game during the event.

Dead by Daylight is a 1v4 multiplayer game that allows you to choose between playing an unstoppable killer and one of four survivors trying to evade a gruesome death. During the Free Play Days event, choose from seven killers and eight survivors. This deadly game of cat and mouse also lets you to meet some of the most iconic killers and survivors from horror franchises, such the latest addition: “Stranger Things“ (sold separately)!

Strap into your wingsuit and bring the thunder in Just Cause 4. Explore the open world of Solís as Rico Rodriguez and take down the Blackhand by any means necessary. Access an arsenal of gadgets, weapons, and vehicles in the largest and most action-packed Just Cause game there is!

In TerraTech you explore, build, craft and battle across alien worlds in a physics-based construction sandbox. Design cars, tanks and planes from a huge library of blocks. Scavenge, craft and buy new parts in order to survive and become the ultimate planetary prospector. Also just around the corner is the next major free content update, including a whole new futuristic corporation – Better Future – and an online co-op Creative mode!