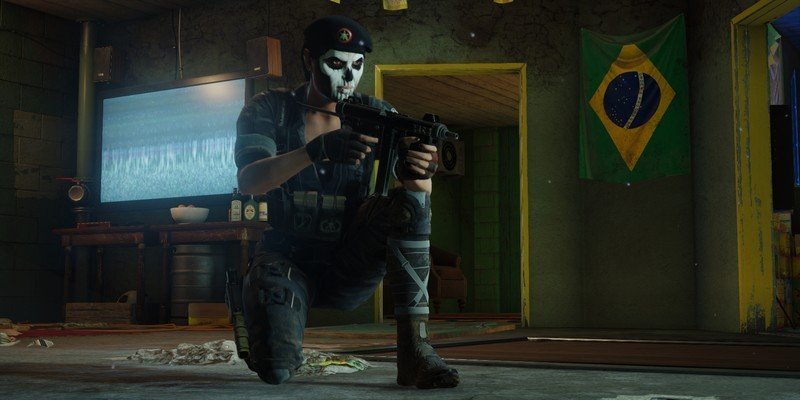 Caveira is on track to secure her first Elite skin in Tom Clancy’s Rainbow Six Siege, according to a new leak. Ubisoft’s hit tactical shooter sustains its free tri-monthly updates with aid from digital cosmetics, available via in-game currency and microtransactions. Operator Elite sets distance themselves as exclusive “premium” cosmetics, bundling a collection of themed items for around $15.

Rainbow Six Siege currently features over 20 Elite sets, spanning close to half of its playable Operator roster. Keen-eyed users previously discovered an Ela Elite set among game files, shaking up the Polish defender in punk attire, expected for launch alongside Year 4 Season 4 in December. It appears Caveira is up next, bringing a relaxed look to the light-footed hunter.

Indication of the Caveira Elite comes via Twitter user @RolyNoly1, famed for prior leaks of cosmetics and the Doktor’s Curse Halloween event. This brings our first alleged off-screen image of Caveira’s new skin, alongside references to the signature golden Operator card, skin name, and surrounding history.

The skin shows a significant departure from the Operator we know, ditching the skull face paint and military garments. Her wardrobe change includes a crimson crop top and gloves, black leather pants, and an accompanying deep red M12 SMG. RolyNoly1 also alludes to an upcoming Capitão skin, completing the Skull Rain duo. It comes as little surprise, given facial reworks to Caveira, Capitão, Lesion, and Hibana in 2019 – the latter who both received Elite sets.

As with all leaks, take details on the Caveira Elite lightly until confirmation from Ubisoft. As a work in progress, plans can change, with no suggestion of availability. If Ela makes a Year 4 Season 4 debut, Caveira may lie among early Year 5 ideas.

Ubisoft’s hit shooter is hotter than ever, touting tense tactical gameplay, and regular free updates. With millions of players in 2019, Rainbow Six isn’t slowing down.